Is my house suitable for Solar PV?

There are, as I'm sure you've noticed, a lot of folks advertising solar PV at the moment, despite all the fun with Her Majesty's Government, the courts and the feed-in tariff (of which more in a later post). Setting aside for that later post the question of 'can we afford it?', this post looks at the practicalities of solar PV. 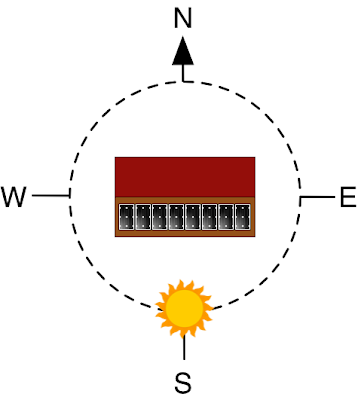 The ideal roof for solar PV is big enough to hold a 4kW system (about 30 sq m), slopes at a bit over 30º, faces due south, and has no shade. However, if you can't manage that, you're probably still OK. Provided you have a roof, or more than one in fact, with not over much shade, that faces at least a little bit south, you will be able to generate a reasonable amount of electricity. Surprisingly, all other things being equal, a roof facing east or west potentially generates 86% of the power of a south-facing roof.

There are a number of handy online sites that you can plug a postcode and a rough idea of your roof configuration into, and in return it'll spit out an equally rough idea of how many kWh you can expect to generate in a year. They're generally much of a muchness, since they all tend to use the SAP 2009 based calculations, which in a nutshell multiply the output rating of the panels by a factor that takes into account an element for facing, for angle of roof and for shade. If you have half a brain and a pocket calculator or a spreadsheet you can do it yourself, pretty much!

Consensus is that the independent estimator at PVGIS is better (SAP 2009 is apparently a bit pessimistic), but suppliers are, as I understand it, required to give you estimates of ROI based on SAP 2009. Of course, it's all entirely weather dependent, on top of that. This past week we've had a 16+ kWh day on April 1st, and a miserably wet day on the 4th that generated a stupendously uninspiring 1.24 kWh.

Most suppliers will be reasonably straight with you, although when we got our quotes we did find that the SAP 2009 factor varied from 690 to 820 for the same roof! It's worth plugging everyone's quotes for the power output of the system and the predicted annual generation in kWh into a spreadsheet and comparing them, just to see who might be over-egging the pudding a bit.

To summarise, though, as long as you have a decent roof that isn't entirely shaded by trees or next door, and faces at least a bit south, it's worth asking for a quote. Most if not all companies don't charge for quotes, and as long as you don't let them pull the wool over your eyes as regards ROI, you'll be fine. Of which, more next time.
Posted by Mike Whitaker